PL-LAB provides access to distributed laboratory, spread around Poland and interconnecting major academia institutions and offering variety of equipment with different functionalities at a large scale. The major focus of experiments performed so far in PL-LAB was on how to enable Parallel Internet paradigms in future networks. The clean-slate approach has been proposed and validated in the testing infrastructure. The equipment available in PL-LAB creates opportunities for such experiments, allowing an implementation of low-level network functions in network processors and net-fpga boards.

The hardware available in PL-LAB is categorized and listed in the following table.

The variety of deployed hardware creates opportunities to perform experiments on subjects like Content Aware Networks, IPv6 practical deployment, 4K 3D video streaming, or introducing Parallel Internets concept based on infrastructure virtualization. The combination of network, applications, protocols and unique hardware gives high potential for solving Future Internet problems and allows validation of solutions and architectures which are expected to fulfill current and arising demands for connectivity services at the global level. Distribution of the equipment in the testbed is shown on Figure 1. 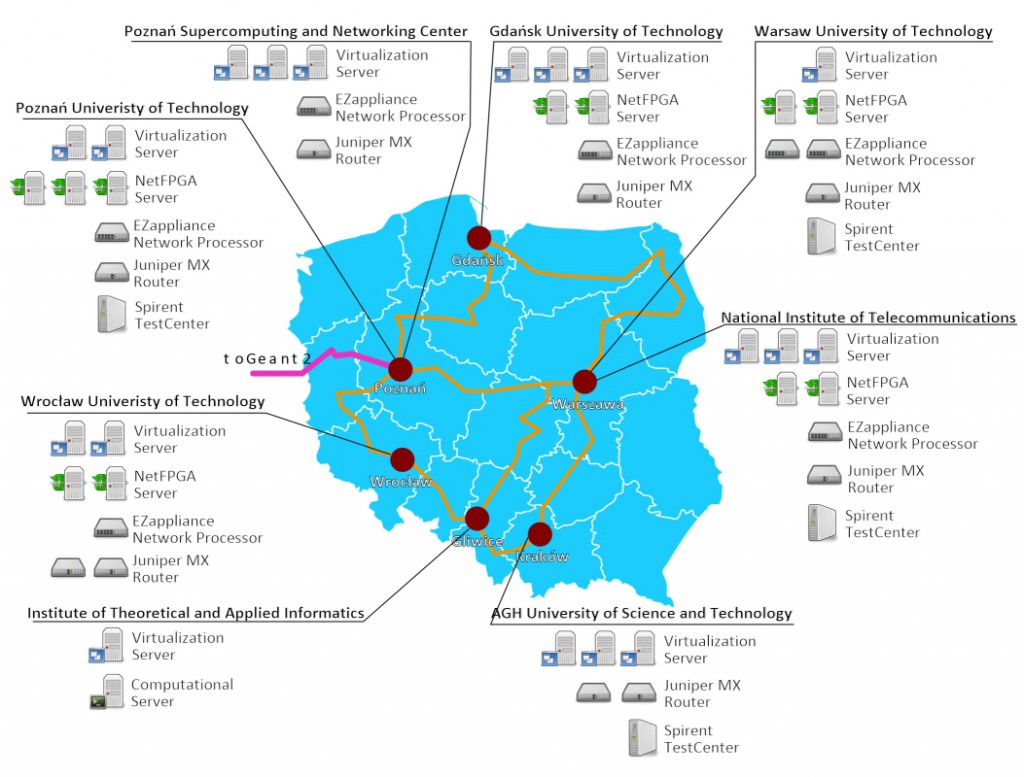 The primary objective of PL-LAB is to create point-to-point and multipoint-to-multipoint topologies with dedicated capacity between particular laboratory equipment located in different laboratories. Such connections constituting a PL-LAB User Laboratory, are isolated from both non-PL-LAB traffic, and other simultaneously running PL-LAB experiments. The usage of the Polish NREN high capacity network infrastructure – PIONIER, as the backbone network, guarantees high bandwidth and a scalable environment which can merge eight laboratories into one distributed environment. The independence from Internet infrastructure gives an advanced traffic policy management, flow controls and reliability for inter-laboratory connections.

PL-LAB Access System is currently being enhanced in order to fully integrate PL-LAB facility with the Fed4FIRE federation. The scientific/academic work is financed from the European Union’s Seventh Framework Programme for research, technological development and demonstration under grant agreement no 318389 (Fed4FIRE) and financial resources for science in the years 2016-2017 granted for the realization of the international project co-financed by Polish Ministry of Science and Higher Education.